Madhouse at the end of the Earth 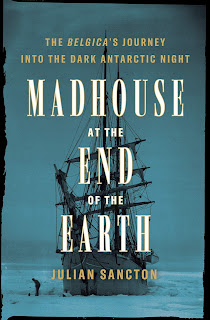 "Madhouse at the end of the Earth", by Julian Sancton. I just finished reading this book. I have not enjoyed reading a book so much for such a long time.

This book is based on the journey of Belgians and other countrymen (Polish, Danish etc.) to Antarctica in 1898 to reach the South Pole. The journey starts from Belgium goes to Argentina to go to the Antarctica. All the time I was reading the book, I was completely immersed in the journey. It was written so well that I felt I was there with the adventurous sailors. So well written.

There were all kinds of people on the ship, the captain - Lecointe, commander de Gerlache, second in command, first mate - Armundsen, scientists and of course the ship engineers. The one addition they did not do a good job of recruiting was a cook. All the time I felt that they could have used better food! One person he could not recruit in Belgium or Europe was a ship doctor. This is where the one and only American, Cook, came in. I think he really saved the Belgica - the ship and its crew. If he had not been on board, then all would have died of scurvy. If not scurvy, then they would not have been able to saw out of the ice.

The book was all engrossing and so interesting despite the fact that the ship was stuck in Antarctica for a year - all of winter. There may not have been much going on but the way Sancton wrote the book made it all so good. I felt I was there with the crew, walking on the ice, singing with them, feeling cold as they were freezing.

There was so much science happening on the ship, biology, physics, astronomy, geography, medical science and of course anthropology (from the doctor). Some of the crew members were always into learning and making the most of each moment they had. I found that really inspiring. Except for the crew who abandoned ship in the beginning, all the crew seemed really dedicated to the ship and the commandant. Despite all that was going on, there was no mutiny or major fights. It seemed they really all were a team.

I would recommend the book to everyone.