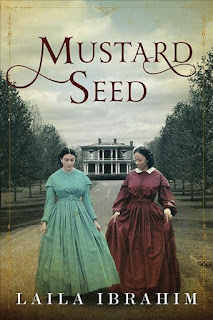 I never expected an author with the last name Ibrahim to write about something so American so white and so historical about America.

I am really glad I picked up this book to read. It was very nicely written with authenticity to historical facts. The story is about these two families, one white one black connected through a slavery past and connected again 20 years later through freedom.

The story is written from the perspective of two young women, one black and one white, both with very different vision of their future from their older generation. I don’t want to write the whole story but I do want to make some observations:
·        The next generation can choose to be different, if they want to. But it takes a lot of courage to break tradition. I am not saying the cowards choose to stay in the older culture, I think they find security in it. They like carrying out traditions and their family history, no matter how awful it was. But again, to them it is not awful because it is their “family” history.
·        One should learn history. Without history there is no future. Our present is based on our past and if we don’t know what that is, then how do we grow?  We will keep repeating the mistakes of our past.
·        Some things are inherently bad, no matter which century or culture one lives in. For e.g. stealing – always wrong to take something that does not belong to you. Slavery, in context of this book, will always be bad. If you need people to work for you, then you pay them for the work. they will be your employees. And if you treat them properly they will always work for you. But greediness is one of the causes of slavery.  The other is denigrating another person.
·        There is nothing that love will not conquer. Some people are definitely born evil, but there are a number of people who’s lives would change if they got love and compassion from family and friends. This is one reason I despise bullies. They create an environment to create evil just like what they themselves are.

I did not know much about slavery before coming to USA. But then I saw Mississippi Burning, the movie, and it showed me a side of America I had not imagined. And now with Trump in the White House, I see America burning everywhere. I have never felt so brown in my life!

I don’t like watching or reading anything about slavery, but reading about it me gives me more perspective on who these Americans are that I now call my fellow citizens. (It took me more than two years to get myself to watch 12 Years s Slave and it really bothered me that people can be so evil.) All the Americans I had met were hospitable and friendly in Toledo, Buffalo, Missouri.  I could not even imagine they had a racist bone in them. My PhD boss, a British guy, was racist, but it did not affect me so much personally and our research group was quite diverse so a number of things got absorbed or ignored.

In Virginia I could feel the racism from my students, and I had a hard time accepting that any white American could be this way. I left Virginia very soon. But since then I have read some books and watched movies on the slavery issue, mostly fiction. All of the stories are drawn from nonfiction, of course. The atmosphere in America has also changed a lot since Obama became the first black president.  All the racists started coming out and now with Trump in office they are all out. I now find it incredibly hypocritical of Americans talking about not letting immigrants come into their country, when essentially that is what they all are.

I don’t think I even want to venture into reading about the Native’s history or it will make me even more mad. I have seen a couple movies and I some books and that also make me super mad! Some of the whites think that the world belongs to them and they can treat people however they want. The sad thing is they have been getting away with it too!

Back to the book, it was really well written with all the pain and helplessness one feels in certain situations. The best part of the book was the positives in the book despite all the miserable happenings. The two young women were strong in character and ultimately came through for each other.