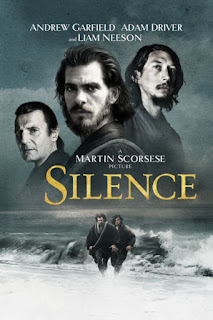 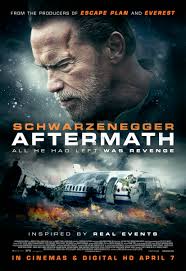 I am not a big fan of Arnold Schwarzenegger but Aftermath seemed like a different kind of movie. And it was. It started off really well, tragic, but well.  A plane accident kills Arnold's wife and daughter (who was pregnant). The accident was just that - an accident. The cause was a result of communication error in the flight traffic control room. It resulted in more than 270 people dying in the plane crash.

The movie is about Arnold (Roman) and Scoot McNairy (Jake), two men on two different sides of this story but dealing with immense tragedies: Roman dealing with the loss of the only two people he loved and Jake dealing with the guilt of accidentally killing 270 people. Jake is a happily married man with a young son, but everything in his life becomes meaningless after this incident. He goes into depression. Roman starts spending too much time in the cemetery.

The story takes interesting turns on how these two men are trying to cope with their grief. Eventually after one year both are sort of getting settled in new roles. Jake changes his life, his name and gets a new job in a new city. Roman quits his job and does odd jobs. Roman sues the airlines asking them only for an apology, which he never gets from them or anyone.

Their paths never collide until Roman asks a reporter, who had previously contacted Roman for a story, to find out about the identity of the air traffic controller. Until now the story was going fine for me, but after this incident the story took a bad turn.  They could have made the movie in such a different way. If you plan to see the movie, don't read anymore.

The reporter told Roman the identity of Jake and his home address.  Roman goes there to ask Jake for an apology.  At the same time, Jake is rebuilding his life and finally his wife and son come to see him in his new place. And then Roman barges in all this wanting an apology. Jake tells him to go but Roman doesn't and in his distress he kills Jake with a knife. Jake's wife and son are inside and it is just a shocking event. Roman goes to jail, comes out after ten years and goes straight to the cemetery. He is followed by a young man. Yes, you guessed right, Jake's son, now all grown up. Roman says nothing has changed in the cemetery but Jake's son says everything has changed since his father died. Then it clicks in Roman's mind who this young man is. The son has a gun and wants to kill Roman, but his conscious does not allow it. Roman apologizes to him and when the son asks him to go, he goes away.

My problem with the whole movie is how alone everyone is in this movie. Roman is alone in his grief. No one from his work comes to see him. He has no friends. Jake is lucky to have a wife, but she fails to empathize with him and support him. She does not divorce him and in the end is still waiting to be with Jake, but she was not as compassionate or supportive when he needed it most. Towards the end when Roman finds Jake's location and he goes, he is so focused on his own grief that he does not even want to listen to Jake. There was no need to kill Jake. Jake did not deliberately kill anyone or his wife and daughter. But it seems that no one is willing to listen or talk to each other.

Then there is the reporter - why did she give Jake's address to Roman without being present there herself to facilitate the meeting? So unethical. Lastly, the airlines people, who show no sympathy for the family of the passengers. They just offer money as if that compensates for the loss.

All in all, I don't know why the writer, Javier Gullon, wrote this movie which shows the worst of all human behaviour. The movie could have been made into such a positive one with love, sympathy and empathy. Why make such a depressing movie into an even more depressing movie?