Two book reviews back to back...but one year later. Does not mean I have not read any books! I just felt like writing about this one. 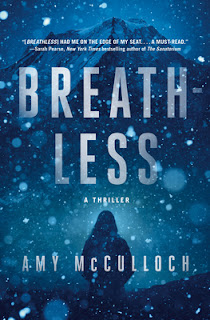 Breathless by Amy McCulloch is her first adult fiction about murders on Mount Manaslu. She is the youngest Canadian (Chinese-White) woman to climb that mountain in 2019. It is a feat as it is about 8163 m (26781 ft) high. It is quite something! She had a few mountain climbing before but this was her first eight thousander, as mountain climbers call more than 8000 m high mountains.

The book itself was a great read, it kept me engaged throughout the journey of Cecily Wong, the protagonist. In fact just as Cecily was pushing herself to finish the summit, I was eager to find out what happens at the end of the story. The book makes you feel like you are part of the journey with Cecily. Of course it helps that Amy herself has climbed the mountain, so anything she writes is going to be from personal experience, except the murders, of course!

The story is about Cecily, a journalist, invited by a charismatic climber, Charles McVeigh, who is scaling the last of the eight thousanders without the use of ropes etc. that are used for other climbers. So alpine climbing - that is what they call when you do climbing without any commercial help. Cecily will be writing his story on return from the summit. She is joined by three other team members, an influencer, a film maker and a Tech entrepreneur, the sponsor of this trip. No one knows anyone before. And then the murders start occurring.

She takes us through the base camp and all other camps in very detailed manner. I was right there climbing with her (from the comfort of my home!). I enjoyed all the details of the trekking, the gear, the food, the Sherpas, the tents and just the living in the base camp at such high altitudes. The mystery is also good. It just shows that you never really know anyone and what their ulterior motives are. And also that everyone was practically a stranger at the start of the trek, but you have to depend on your team mates throughout the journey.

The mountains seem isolated enough, yet just crowded enough to make them seem like a tourist spot, as there are so many people on the trail. Ever since reading this book, I have been exploring on the internet for pictures and found many. One blog I read was of Jackson, an Australian climber. He has amazing pictures if you want to see. https://www.journeyera.com/manaslu-mountain-climb-nepal/

I know I will never be doing this trek. I have done two mountain treks only - Wayna Picchu (next to Macchu Picchu, 2667 m) and Mount Sinai (where Moses received the ten commandments from God, 2285 m). And that was sufficient!

The only other mountain trek book I read was Into Thin Air by Jon Krakauer. That was a bit confusing, but still good. The movie was more enjoyable. I will recommend Breathless to anyone who likes adventures and thrillers!