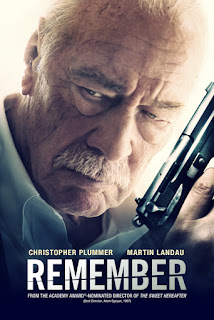 Watched the movie "Remember" today.  Christopher Plummer and Martin Landau.  I had an idea of what it was about - a Jew survivor searching to kill a Nazi for a friend.

It was a great movie.  I knew it would be a little slow and mindful.  Christopher Plummer is not really a young actor anymore.  The movie starts with Martin sending off Christopher on a hunt for a Nazi soldier from Auschwitz.  What I did not realize before was that Christopher Plummer's character, Zev, has dementia, so he tends to forget all the time. So he keeps reading the letter Martin's character, Max, gave him, to revive his memory.

There were so many things that were good and some that bothered me during this movie.  When Zev goes to buy a gun, the seller just sells him the gun, fully knowing that Zev will not remember how to shoot the gun. Why? And this is where I have problem with gun violence in America.

The good part was that everyone shown was so helpful to Zev.  They realize he is old so they help him get his room, taxi etc.  This is the America I really like - I have always found Americans to be very helpful people.

The movie goes on as Zev is searching through four people who might be this Nazi.  His journey is interesting.  I did not have to use my remote to forward any part of the movie. I will not tell the ending as it is very interesting.

The other part that got me was what Zev's son went through. Zev left the nursing home without telling anyone and his son was so worried about him, looking everywhere, especially knowing that his father has dementia.  And all I could think of was my own parents.  I am so lucky to have parents who have all their mental faculties. I could feel the son's pain, because just for one day I had to find my parents. I knew their general location so I found them. But the the time that I was waiting to hear back from them was hard.

And lastly, I want to write a few words about the Holocaust.  I had not heard the extent of the Holocaust until I came to the USA.  Killing 6 million of any people is unbelievable. I will not even pretend to understand what the survivors went through.  However, it has been over 60 years now, Nazi are no more.  And they were given their homeland, Israel, which they consider holy land, by the support of Britain and USA. But how much longer will it keep getting welfare from USA? And how much land will they keep taking from the Palestinians?