"Rules are meant to be broken" - that is a common saying.  Well.....but we need rules in order for this world to function properly.  If we don't follow rules then it is just anarchy, why bother having societies and laws?  So then I have these questions: 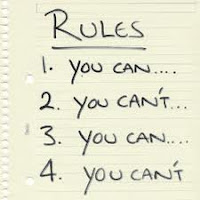 I don't  have a problem with rules :-) I just wonder why people break them so frequently.  The world would be such a peaceful place if everyone just followed some simple things:
Sometimes following a rule can be as simple as driving properly on the road or throwing the trash where it is supposed to be thrown.  But we don't even do that! Why don't we like conforming to rules? (hence the saying - rules are meant to be broken).  I think some of us (myself included) do not like being told what to do.  We know what we have to do and most times we do it.  If we don't follow a rule then it is was for a darn good reason.

I must say that as much as I have been a dependable and responsible person, I have not hesitated to break a rule if I needed to.....or wanted to.  There is some fun in it, while sometimes it is a neccessity.  Most times no one gets hurt.....most times.  I am not the conventional/traditional Indian girl as one might think or maybe I am.  I don't know - I have not met anyone like me yet.  Although as I am growing older I feel the need to follow rules more than before (I still break 'em though!).  It makes life more disciplined and easier to follow.

Lately, I have been thinking a lot as to how breaking a rule can change your life completely.  If I had followed on the path laid out for any typical Indian girl - my life would have been so different.  But it did not happen that way because of my destiny.  So, really do we break any rules ourselves? Or is it in our fate to break those rules? So many scientific discoveries would never have been made if one had stuck to tradition and conservative thinking. So...I feel like it should be okay to think outside the box once in a while.