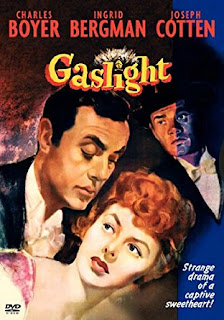 I finally saw "Gaslight".  Since everyone has been saying, "Trump is Gaslighting us", the movie has been on my list to see.

The movie stars Ingrid Bergman (one of my favorite heroins!) and Charles Boyer as the wife-husband couple. Charles (Gregory) systematically and slowly creates an atmosphere for Ingrid (Paula) where she starts believing she is crazy and forgetful.  He will move items, give her items and then ask her for them. He would decrease and increase the brightness of gas lamps at home and make her feel that she is the only one who can see the change in the brightness. So slowly she doubts everything she does. He isolates her completely from everyone.

Of course the motive is all about money! The ending of the movie is really good. For a 1944 movie, I was glued to the movie and did not want to miss any scene.  Ingrid Bergman earned an Oscar for her work in this.

Now I realize that yes, Trump really is Gaslighting us. He says one thing today and tomorrow will say it did not happen, even though it is recorded and he said it in public.  His advisers do the same thing. They change the meaning of his words and then ask us to look into his heart rather than listen his words. What nonsense!! His goal is to isolate all of us from each other and the world.  And of course his motive is all money and power.